Where Kapasa Makasa University is Located 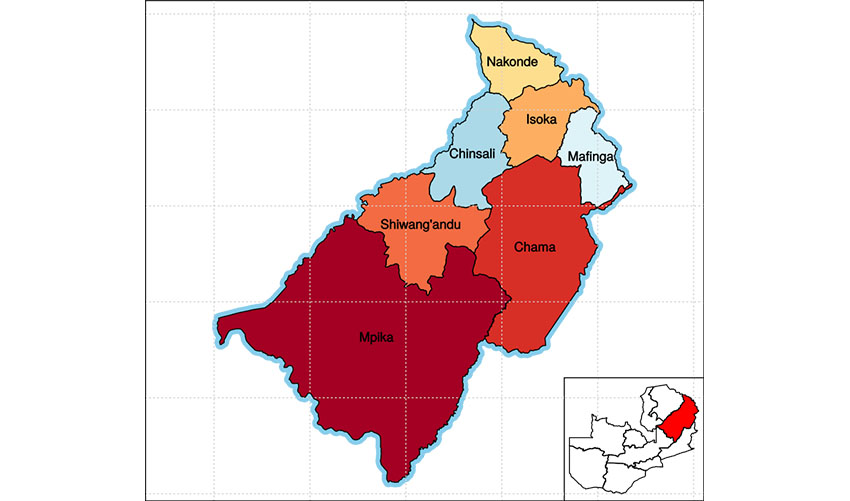 Kapasa Makasa University is probably the only public university located outside the line of rail in a remote rural part of Zambia called Muchinga Province (87,714.15km²). According to the Muchinga Provincial Administration (https://www.muc.gov.zm/?page_id=4914), the province was established in November 2011, is the fourth largest province of Zambia and has a population of about 895,000. It is located in the northeast of Zambia and border Tanzania in the north, Malawi in the east, Eastern Province in the east, Central Province in the southwest, Luapula Province in the west, and Northern Province in the northwest. Chinsali is the administrative center, provincial headquarters. The name Muchinga originates from the Muchinga Escarpment on which it predominantly sits. The province is elongated from southwest to northeast and is located on both sides of the Muchinga Mountains (Muchinga Escarpment).

The Vegetation and Wildlife of Muchinga

The province is rich in mammals, birds, fish, reptiles and amphibians, and insects. It has areas that have been classified as important bird areas by Birdlife International. Important wildlife includes Leopards, Lions, Elephants, Buffalos, Hippos, Giraffes, Zebra and Rhinos which had to be re-introduced. South Lwangwa National Park is one of the best known parks for walking safaris in Africa and boasts of an international airport within the park as well as good accommodation.

The Population and History of Chinsali

The population of Chinsali is estimated at just over 86,723, and 14.2 persons per square kilometer, distributed over a recently urbanizing area. Chinsali district has been known to have traces of precious stones and rare earth minerals, diamond and titanium. The name Chinsali originates from the beating of music drums (https://m.facebook.com/patrioticfrontzambia/posts/2717994458435350) traditionally known as Insali that compelled listeners not to resist dancing. This therefore resulted in people calling it as the place where this kind of special musical instrument is found. However, Chinsali is unique in Zambia as it has referral and proverbial name, Kwitonta Ukushuma Lubanga. Lubanga is a rare indigenous cultivated vegetable found in the northern provinces of Zambia and is botanically known as Cleome gynandra). It has a very rich aroma and a slightly bitter taste to the tongue when cooked. It enjoys massive demand when marketed and is rare due to both high demand and low supply.

Chinsali is a historically rich and unique town. Amongst its historical excellence is that it is the birth place of Zambia’s first Republican President, Kenneth David Butizya Kaunda (MHSRIP); birth place of Zambia’s first Minister of Home Affairs and 2nd Vice President of Zambia, Mr. Simon Mwansa Kapwepwe; birth place of Rev. Paul Bwembya Mushindo (https://zambianobserver.com/who-was-paul-mushindo/) who was a ministers of the church, educationists, writer, and politicians and was honoured by King George of England in 1947 for his contribution to society. Paul Mushindo spent 53 years translating the Bible from English into iCiBemba. He spent over 30 years without wearing shoes, not because he could not afford it but because of his experience and conviction. The Reverend was responsible for the sponsorship of the late Harry Mwaanga Nkumbula’s studies at Makerere University in Uganda. Chinsali is also the birthplace of Alice Lenshina who was a Christian religious leader who founded the Lumpa Church.

One of the rare events witnessed in the history of Zambia was the assembly of three Presidents at the burial of Mrs. Salome Kapwepwe, wife to the late Mr. Simon Mwansa Kapwepwe on 13th May 2017 in Chinsali. Then President, Mr. Edgar Chagwa Lungu, was accompanied by 1st Republican President Dr. Kenneth David Kaunda and 4th Republican President Mr. Rupiah Bwezani Banda to the burial ceremony at the Kapwepwe farm in Chinsali.

It is also the only rural area to be designated to have two public universities in Paul Mushindo University and Kapasa Makasa University.

Access to National Parks and Other Attractions from Kapasa Makasa University

Visitors to Kapasa Makasa University have a range of opportunities to visit some spectacular natural and historical sites. All the sites can be reached within a day’s drive; the Luangwa national parks that can be only be accessed using an offroader with the journey taking longer during the rainy season especially when the access roads are not worked on. The sites include

Historical sites: Birthplace of Zambia’s first republican president (at Lubwa Mission in Chinsali). Old Fife in Nakonde district – Old Fife is a historic place established in 1895 when it served as a boma under the